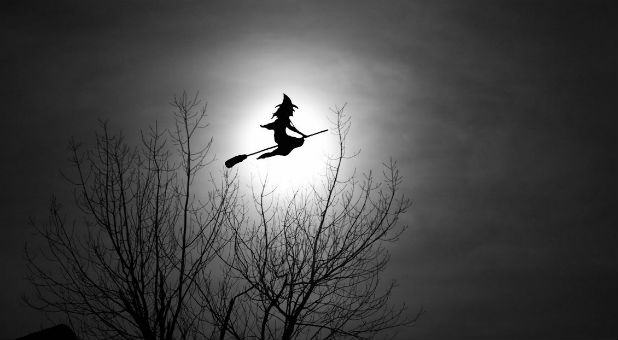 “…you may scoff at such practices but the cold, hard reality of the matter is that they are very real. The dark side has power, and those that have come out of witchcraft can tell you some stories that will stand your hair on end.

On Oct. 31, most people will simply ignore the dark side of Halloween. The vast majority of the population will dress up in costumes, go to parties and eat candy without ever even considering where the holiday came from or what certain people are doing behind closed doors.

On Oct. 31, most people will simply ignore the dark side of Halloween.

The vast majority of the population will dress up in costumes, go to parties and eat candy without ever even considering where the holiday came from or what certain people are doing behind closed doors.

The truth is that Halloween night is one of the biggest nights of the year for witches, occultists and Satanists.

All over America, those who are deep into the dark arts will contact the dead, cast spells and conduct blood sacrifices (in some cases, human sacrifices.) As you will see below, there is a reason why animal shelters across the country ban the adoption of black cats this time of the year.

But even our “innocent” Halloween traditions such as dressing up in costumes, “trick or treating” and carving jack-o’-lanterns all have their roots in ancient pagan practices. And every year the costumes for our young girls become even more sexually suggestive, the horror movies become even more demonic, and the public’s fascination with the occult just continues to grow. It truly is a festival of death, but most people don’t seem to care. In fact, experts are telling us that Halloween has now become America’s second biggest holiday.

According to the National Retail Federation, nearly 70 percent of all Americans plan to celebrate Halloween this year, and spending is expected to shatter the all-time record. (It’s a money-maker.)

The origins of Halloween are Celtic in tradition and have to do with observing the end of summer sacrifices to gods in Druidic tradition. In what is now Britain and France, it was the beginning of the Celtic year, and they believed Samhain, the lord of death, sent evil spirits abroad to attack humans, who could escape only by assuming disguises and looking like evil spirits themselves. The waning of the sun and the approach of dark winter made the evil spirits rejoice and play nasty tricks. Believe it or not, most of our Halloween practices can be traced back to these old pagan rites and superstitions.

On the Wiccan calendar, Samhain is one of the most important points on “the wheel of the year.” Wiccans believe that it is the day when “the god dies,” and subsequently they celebrate his rebirth at Yule (Christmas).

It is also a time when they believe that the veil between the living and the dead is the thinnest, and so it is an opportune time for them to contact the dead. The following is much more on what Wiccans believe about Samhain from wicca.com:

“It is generally celebrated on October 31st, but some traditions prefer November 1st. It is one of the two “spirit-nights” each year, the other being Beltane. It is a magical interval when the mundane laws of time and space are temporarily suspended, and the Thin Veil between the worlds is lifted. Communicating with ancestors and departed loved ones is easy at this time, for they journey through this world on their way to the Summerlands. It is a time to study the Dark Mysteries and honor the Dark Mother and the Dark Father, symbolized by the Crone and her aged Consort.”

Originally the “Feast of the Dead” was celebrated in Celtic countries by leaving food offerings on altars and doorsteps for the “wandering dead.” Today a lot of practitioners still carry out that tradition. Single candles were lit and left in a window to help guide the spirits of ancestors and loved ones home. Extra chairs were set to the table and around the hearth for the unseen guest. Apples were buried along roadsides and paths for spirits who were lost or had no descendants to provide for them. Turnips were hollowed out and carved to look like protective spirits, for this was a night of magic and chaos. The Wee Folke became very active, pulling pranks on unsuspecting humans. Traveling after dark was was not advised. People dressed in white (like ghosts), wore disguises made of straw, or dressed as the opposite gender in order to fool the Nature spirits.

The ancient practices described in those paragraphs sound very similar to what we do today in many ways, but without a doubt some of the traditions have evolved. For example, instead of carving turnips, those who celebrate Halloween carve pumpkins today.

You may not realize this, but Wicca is actually one of the fastest-growing religions in America. And on Oct. 31, Wiccans all over the nation will get together to conduct rituals and cast spells. Here is a blurb from Wikipedia about the Wiccan belief in “magic”:

“During ritual practices, which are often staged in a sacred circle, Wiccans cast spells or “workings” intended to bring about real changes in the physical world. Common Wiccan spells include those used for healing, for protection, fertility, or to banish negative influences. Many early Wiccans, such as Alex Sanders, Sybil Leek and Alex Winfield, referred to their own magic as “white magic,” which contrasted with “black magic,” which they associated with evil and Satanism. Sanders also used the similar terminology of “left hand path” to describe malevolent magic, and “right hand path” to describe magic performed with good intentions; terminology that had originated with the occultist Helena Blavatsky in the 19th century. Some modern Wiccans however have stopped using the white-black magic and left-right hand path dichotomies, arguing for instance that the colour black should not necessarily have any associations with evil.”

If you are not familiar with these things, you may scoff at such practices. But the cold, hard reality of the matter is that they are very real. The dark side has power, and those that have come out of witchcraft can tell you some stories that will stand your hair on end.

Wiccans think of themselves as “good,” and so they tend to reject blood sacrifices and things of that nature. Satanists, however, perform human and animal blood sacrifices.

For those who are deeper into the occult, blood sacrifice is an essential part of Halloween. Many animal shelters all over the nation ban the adoption of black cats this time of the year.

It’s the week of Halloween, and if you suddenly wanted to adopt a black cat, you would probably have a hard time. That’s because thanks to their association with witchcraft, accepted wisdom holds that Halloween is a time when people ritualistically mutilate black cats, while some others sacrifice white cats.

God Warns Before He Judges