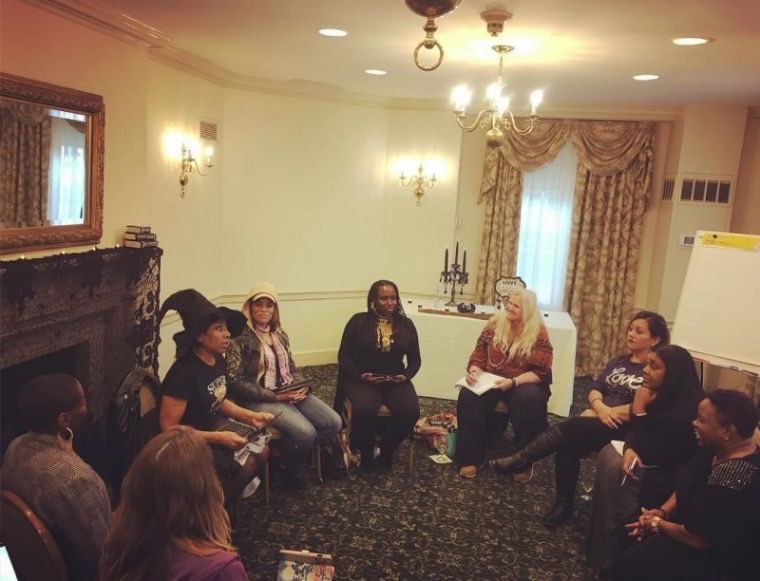 “Christian witch” Rev. Valerie Love (in hat) and a group of students at The Covenant of Christian Witches Mystery School in Salem, Mass

Despite biblical warnings against the practice of witchcraft, the “Reverend” Valerie Love, who describes herself as a practicing Christian witch and an ordained minister of spiritual consciousness, is insisting that there is nothing wrong with Christians being witches and has recently launched a school to help Christians tap into magic.

She explained that she was “born a witch” but was forced to stifle her identity as a Jehovah’s Witness from age 4 to 30 when she finally left the “cult.”

“Where do we get off believing that we can actually dictate to other people how they worship. … It’s not our lane,” Love said. “I was born a witch and I love it. I’m so thankful. People are afraid of the word because of fear and ignorance and I am here as a minister of the living God to dispel fear and ignorance.”

At her Christian Witches website, Love also shares her story and offers a number of resources to help Christian witches including her recently launched Covenant of Christian Witches Mystery School which recently launched in Salem, Massachusetts. The school, according Love’s website, was launched to “inspire, teach, share wisdom, and support magickal beings in owning and embracing magick, practicing magick and utilizing magick as a path to SELF-REALIZATION.”

My job as a minister of the living God, as an ordained minister of spiritual consciousness is freedom, to set us free. … People are in religious bondage because religion told you what to think, what to do. I’m not here to tell you what to think. I’m here to support you in how to think,” she said in her recent video.

On her personal website that focuses on personal “enlightenment,” love also offers coaching programs for an investment of $5,000 to $50,000.

Jennifer LeClaire, founder of Jennifer LeClaire Ministries and director at the Awakening House of Prayer in Florida who has been tracking the Christian witches movement for several years, has warned that the mixing of witchcraft and Christianity is “dangerous” and said the movement is growing.

“In this season, I’ve seen a rise of Christians practicing witchcraft. Or maybe they aren’t Christians at all. I won’t judge someone’s salvation, but when people in church release word curses, pray against you, and conduct unholy fasts to destroy you, the fruit of the Spirit is clearly lacking,” she wrote last fall. “Galatians 6 lists both the fruit of the Spirit and the works of the flesh. Witchcraft is among them. But there is a higher level of witchcraft that some so-called Christians are tapping into and it’s dangerous.”

Christian experts at Got Questions Ministries also warned that “God takes witchcraft very seriously.” “The penalty for practicing witchcraft under the Mosaic Law was death (Exodus 22:18; Leviticus 20:27). First Chronicles 10:13 tells us that ‘Saul died because he was unfaithful to the Lord; he did not keep the Word of the Lord and even consulted a medium for guidance,” the ministry noted. (For just that, he DIED!)

“At the heart of witchcraft is the desire to know the future and control events that are not ours to control. Those abilities belong only to the Lord. This desire has its roots in Satan’s first temptation to Eve: ‘You can be like God’ (Genesis 3:5),” the ministry explained.

“Since the Garden of Eden, Satan’s major focus has been to divert human hearts away from worship of the true God (Genesis 3:1). He entices humans with the suggestions of power, self-realization, and spiritual enlightenment apart from submission to the Lord God. Witchcraft is merely another branch of that enticement. To become involved in witchcraft in any way is to enter Satan’s realm,” the experts added.

God Warns Before He Judges